As it is just days away until the European Referendum, some of my posts this week will be on Ashford’s links with the wider world. 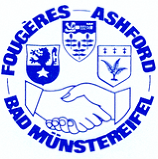 Twinning really began after the Second World War as a means of fostering friendships: finding commonality and celebrating peace and reconciliation, particularly with former foes.  But, as one might expect with Ashford, their history of such alliances goes back further than that.

Bad Munstereifel was occupied by British troops during the First World War.  One of the Commanding Officers, Major J Goode, formed strong personal friendships with many people in the town, which continued, even throughout and beyond the Second World War.

Major Goode’s brother-in-law, John Wiles, Mayor of New Romney, continued his work.  He travelled to the Rhineland with Winston Churchill and organised many exchange visits between young  people in both Bad Munstereifel and Ashford, at a time when travel between the former enemies was still unusual.  This resulted in an official Twinning ceremony on 26th August, 1964.

There are annual exchange visits to each of the three towns, including children from the various secondary schools, creating musical, sporting, cultural and business links and friendships between the different countries, celebrating their joint heritage.

As this wouldn’t be a blog post from me without some reference, or tenous link, to my dog, here he is: