I went to a 21st birthday party last night.  Given that I’m in my mid-forties, that doesn’t happen very often these days!  This one, however, was for the Create Music Festival (website here), held in Victoria Park.

Each year, an average of 13,000 people come to this family-orientated music festival.  Yesterday, I’m sure the crowds were larger, as the weather was glorious and it was a great way of being outside with your family.

There was a bumper-car track, giant harness swings and bouncy castles, amongst many other activities guaranteed to keep the kids amused. 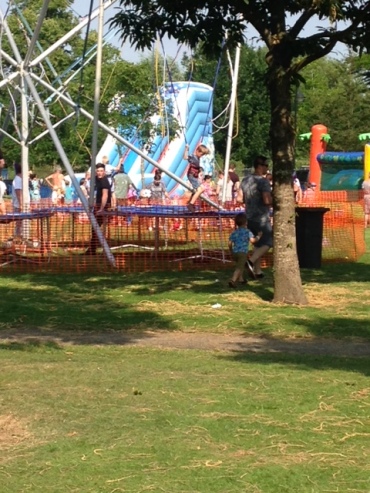 There were four live music stages, covering rock, pop, folk and dance.  Last year, my childhood subversive hero, Adam Ant, headlined and I wondered how they were going to top that.  This year, as if tracking my advancing years, it was the turn of my teenage subversive hero: David Bowie.  Ok, I realise he died earlier this year and, no I haven’t come to terms with it yet.  But I don’t need to.  The David Bowie tribute act (www.davidbowietribute.co.uk) was the next best thing – it was amazing!  You can watch a small video of @DavidLive performing Space Oddity here.

Some of the outdoor theatre included a giant David Bowie puppet, which first made an appearance at Glastonbury a few weeks’ ago.

There were also the very popular Ashford Farmers’ Market stalls; the Curious Drinks bar – Ashford’s new Chapel Down brewery coming very soon to the centre of Ashford town; and various stalls from MadeInAshford: a group of local, independent retailers, displaying Ashford’s creative heart, selling everything from gorgeous stationery and jewellery to unique and stunning baby clothes.

The evening was finished off by a very special pyrotechnic ending, centring on the Hubert Fountain.  As well as being Create Music Festival’s 21st birthday, the Festival was also celebrating the 175th birthday (suddenly, being 44 doesn’t seem so bad …) of George Harper: the man who gave the Hubert Fountain to the people of Ashford.

Ashford has a rich artistic and musical heritage, which the Create Music Festival 2016 has enabled to continue and thrive.  Can’t wait for next year!